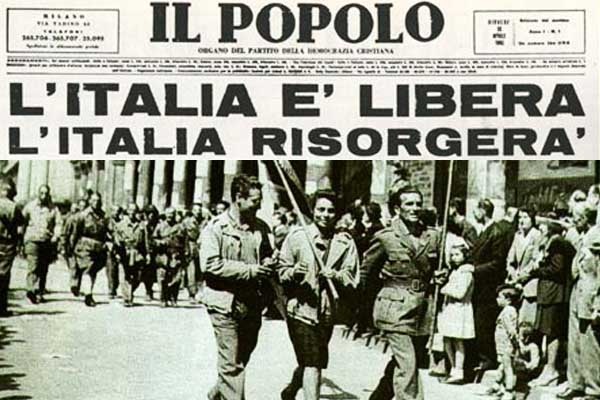 April 25, 2017 marks 72 years of an Italy free from German Occupation, from a fascist dictatorship under Mussolini and from being at war with… itself. All pretty great things to celebrate right?

April 25, 1945 and the next years that followed marked a revolution in how Italy was governed. In a referendum in 1946, Italians chose to end its short lived monarchy and opted to create the Italian Republic. The Republic’s creation is a distinct event which we celebrate on June 2nd each year as la Festa della Repubblica (Italian National Day).

When people think of Italy, they think history. They think of the Roman Empire. They think of hundreds or thousands of year old structures still standing in a country eternally caught between the new and old. Most don’t realise that Italy as we know it did not exist formally until the unification in 1861. There’s another party for that, by the way, and we celebrate it on March 17.

The point is that, as a country, Italy is younger than the United States. By 85 years. That’s fairly humbling.

This is the date when the National Liberation Committee of Upper Italy (CLNAI) officially announced insurgency via radio. By May 1, all of Italy was liberated. Mussolini was shot and killed. The specific days on which the insurgency liberated specific cities varies.

Here is some great historical footage of the events surrounding the liberation:

Any events going on for Italian Liberation Day?

As with most Italian holidays, there’s a whole lot of food festivals, special venue openings, art expos and open air markets set up for the occasion. Most have nothing to do with the actual event. All are a great way to spend a day off with friends or family.

This year April 25th falls on a Tuesday. This means nearly every Italian has pre-emptively asked for Monday off to partake in the age-old Italian tradition of “ponte“. Ponte, which means bridge in Italian, is the act of bridging a national holiday that falls on, say, a Tuesday or Wednesday – with the previous weekend, creating 4-5 days of glorious time off.

On a more serious note, ANPI will be holding its annual manifestazione (a word that scares me nearly as much as sciopero) which is essentially a march. ANPI is the National Association of Italian Partisans is essentially the remnants of the resistance. The resistance is the name for those who fought against the fascist regime in the last days of Mussolini. The purpose of the march this year, according the the flyer released will be “for the application of the constitution which was born of the resistance”. They will also be hosting an event in which they will be projecting the film “Roma Città Aperta” (Rome, Open City) followed by discussion. The film, released in 1945, is set in Italy during the Nazi occupation.